Within an EtherCAT network frames are sent to and received from devices automatically according to the connected ports. The following picture illustrates that the frame is returned by the last slave because it has no more devices connected after it:

It is possible to re-establish communication and restore the network by determining the last fully functional slave prior to the faulty slave and logically closing the port:

EC-Master’s “rescue scan” feature can be used to search for the faulty connection, disable it, and rescue the remaining slaves to restore the communication in the network.
EC-Master will report which slave and specifically which port on that slave is faulty, as well as the slaves that are still reachable for communication. With this feature it is possible to easily locate the error source and continue operation with the remaining slaves.

The synchronization of system components or production lines with several EtherCAT Segments can be done with different solutions:

Depending on the application the accuracy of the synchronization has different requirements. For the synchronization of two production lines often the accuracy in the range of milliseconds is enough.
However if two or more motion control networks should be synchronized it may be necessary to have the Sync-signals exact at the same time in all devices (e.g. for a network wide commutation information) - that means an accuracy better than a microsecond may be needed.
Within one EtherCAT Segment the Distributed Clocks (DC) mechanism can be used, to synchronize the network devices. DC offers accuracy much better than a microsecond.
The first device that should be synchronized is used as the reference clock for that segment.
The synchronization of several EtherCAT Segments with a high accuracy means that the DC reference clocks in the segments must be adjusted.
The leading clock is called Grandmaster clock. It can be an external Time information, e.g. GPS or DCF77 receiver (see Figure 27), but it can also be one of the DC reference clocks.

The synchronization of two or more EtherCAT segments can be done by a Bridge device as shown in this figure. 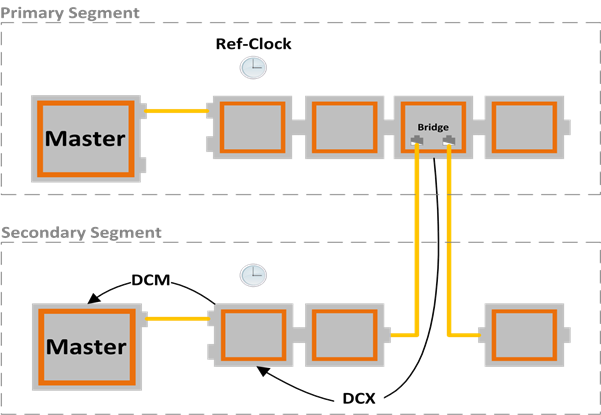 The Bridge has two EtherCAT connections (internal two EtherCAT Slave Controllers are used). The primary port is connected to the first segment; the secondary port is connected to the second segment. One of the two ports can be configured to be the leading time reference. The Bridge can calculate the time difference and offers the TimeControlValue to the Master. The Master can then adjust the Reference Clock. During startup the two segments can be powered-on at different times. That means that there will be an absolute time difference between the two segments.

To synchronize the Secondary Segment two software algorithms are involved:

Configure drives connected to the EtherCAT network without additional cables

Using the mailbox protocol Ethernet over EtherCAT (EoE) standard Ethernet frames can be tunneled trough an EtherCAT network. Based on this, a communication to slaves with locally running TCP/IP-based applications (e.g. Web Server) can be established. More and more manufacturers of EtherCAT drives are supported this connection in their drive setup and tuning tools. 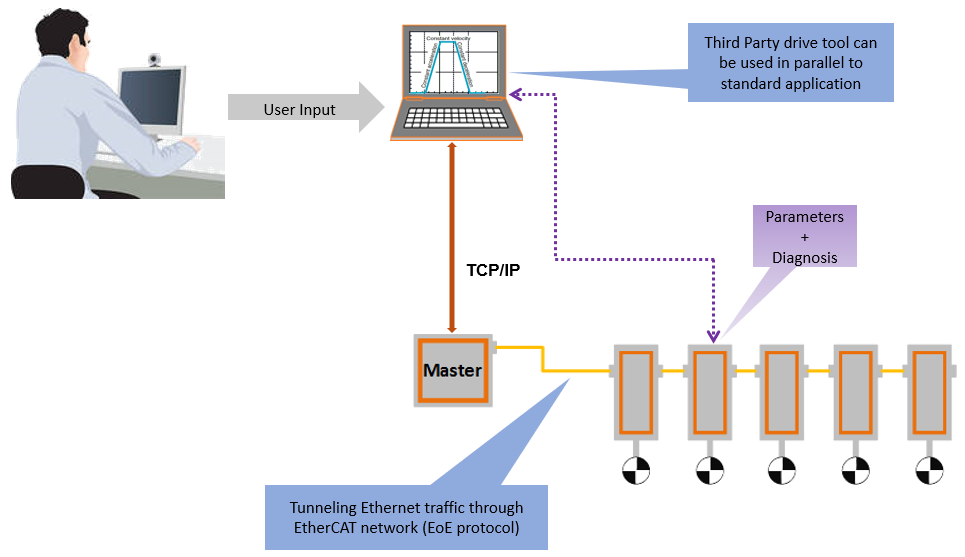 Acontis is offering all required software modules to enable TCP communication between a third party software on Windows and a EtherCAT slave supporting EoE. On the master controller just the proven RAS-Server has to be enabled. The RAS-Server is included in the EC-Master core license and available on many operating systems. 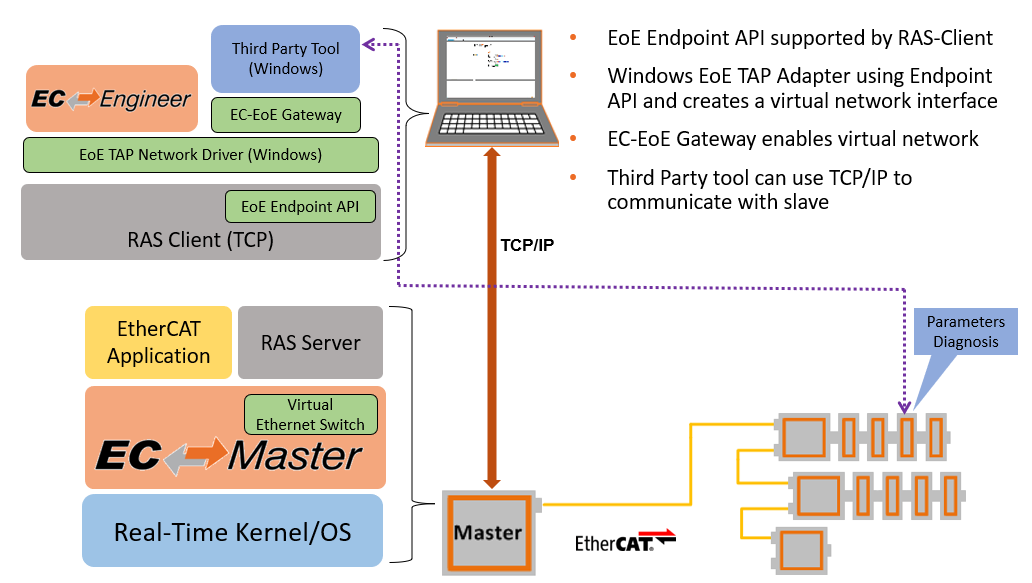