Synchronization between master and slaves

For the synchronization of the slave devices the Distributed Clocks (DC) feature of EtherCAT is used.
Referring to this the first DC-capable slave in the bus is defined to be the reference clock.
The time of the reference clock is distributed to all slaves by means of the EtherCAT master. Thus the EtherCAT Master cyclically sends a ARMW command in order to read the bus time stored in the appropriate register in the ESC (EtherCAT Slave Controller) of the clock master and to write this value into the corresponding registers of the DC slaves.
These DC slaves update their local time by means of an controller that is integrated in their ESC.
In order to assure the requested accuracy (values below 1us can be achieved), the delays of the EtherCAT frames between the particular slaves have to be compensated, in addition.
For each slave the time between when the frame which was sent and the time when it was received will be measured.
Afterwards, depending on the bus topology, the master calculates the delays between the slaves and writes the corresponding delay compensation values into the register 0x928 of the ESC.

The ESC controller's DC unit provides two digital output signals, SYNC0 and SYNC1.
Based on the bus time, these SYNC pulses, whose frequency generally correspond to the EtherCAT bus clock, are generated.
If the EtherCAT master for example sends the cyclical I/O data in a 1 ms rate, the SYNC pulse frequency usually also set to 1 kHz.
These SYNC signals on the slave side, on the one hand are available as a digital output signal (e.g. to activate slave hardware components) and on the other hand as an interrupt source for the slave software.

Referring to this it is obvious that all slaves have to be provided with the new data before the SYNC pulse is released.
To achieve this a minimum time lag between the arrival of new cyclical I/O data and the SYNC pulse must be guaranteed.

Typically, the EtherCAT master stack sends it cyclic I/O data based on a hardware timer in the controller hardware (e.g. a 8254 timer in an embedded x86 PC).
In case the system shall run in a 1kHz cycle, the 8254 timer as well as the slave timer that is responsible to generate the SYNC pulses are set to 1kHz.
But the 8254 timer and the slave timers both will not run at an exact cycle rate of 1kHz.
Effectively there will be a drift between these two timers and thus no constant distance between sending the cyclic I/O data in the master and generation of the SYNC pulses in the slaves can be achieved.
In order to control that distance at a well defined constant value, the EtherCAT master has to be synchronized with the DC clock master (that is the first DC capable slave in the bus).
This mechanism is called Distributed Clocks Master Synchronization (DCM).

The DCM Controller cyclically calculates the difference between the EtherCAT master time and the DC clock master time.
According to the set value (which is the distance of the SYNC pulse to the timer-interrupt in the master) the PI controller algorithm calculates the re-adjustment value.
When using “Master Shift” the re-adjustment value affects the physical timer of the EtherCAT Master (e.g. the 8254) whereas when using “Bus Shift” it affects register 0x920 of the DC Clock Master.

The Class A EtherCAT Master supports both methods (master shift as well as bus shift).
Synchronization of the master with the slaves is one of the most challenging features of EtherCAT.
Based on our experience we will advise customers concerning the right method to use for their given application and hardware. 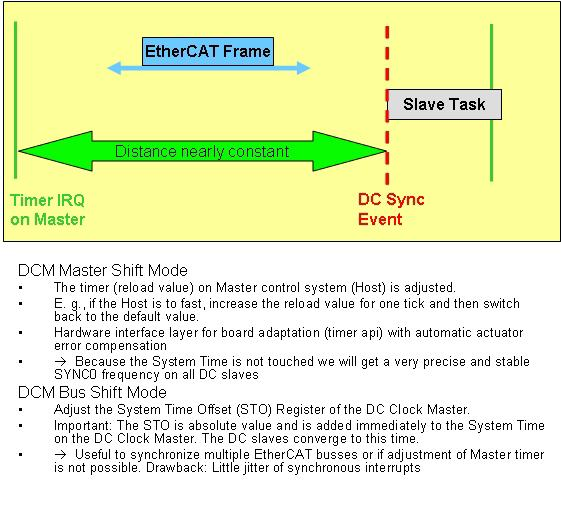